When looking in awe at fresh "bud," you can't help but notice its magnificent complexity: sugary crystals, fiery hairs, rotund nugs, immersed in little leaves. But, have you ever stopped and wondered what purpose do each of these components of cannabis's anatomy serve?

Let's start with the "birds and the bees":

Just like humans, cannabis plants can be either males or females — or they can even be born a hermaphrodite! The differences between male and female plants are profound. In the botanical world — conventional wisdom holds that male plants are pretty useless. Some might say, “that sounds a lot like the human world, too!”

It’s true, generally speaking — with a few notable exceptions — male plants are far less rich in cannabinoids than their superior gender — including THC. THC, of course, is what produces the psychoactive effects in cannabis that consumers so enjoy! (Not to mention many of the therapeutic effects.)

But, to say male plants are useless, is factually incorrect.

First, the good males make great fathers. High quality male plants play a pivotal role in any cannabis breeding program. After all, the female plants would get pretty lonely! — they need pollen from a male.

Identifying and selecting the right male plants will help ensure they’ll be passing on good genes to their kids. They are, after all, providing half of the DNA towards the offspring. With a good “baby daddy,” the offspring will most likely inherit many of the most important traits, including overall health, resistance to mold and pests, and growth rate. While their influence on potency and flavor may be less pronounced, however, savvy breeders can instinctively identify male plants that will make ideal breeding partners.

Moreover, males can be useful when breeding auto-flowering strains, where they exert significant influence on their offspring's growth patterns while allowing the flowers to preserve the potency and flavor of "mamma bud." And, they play a vital evolutionary role in their species.

They're also good for making raw juice (but not as good as the females — they seem to beat men in everything!). Males are also a remarkable source of hemp fibre, and finally, they can be used as a natural pesticide and repellent against pets. And, if you're lonely, they also make pretty good companions — and, they never back mouth! 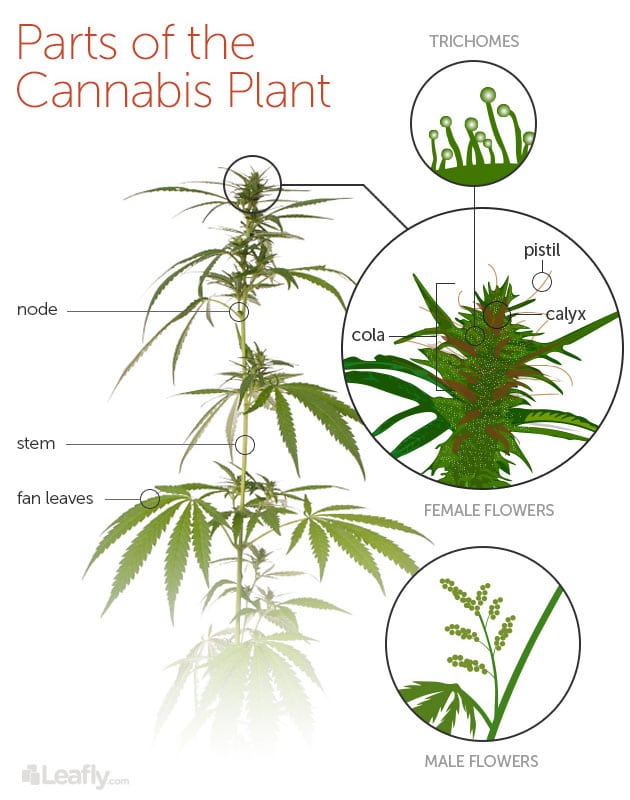 Beyond the basic sex characteristics of male and females, much like their cousins in the plant kingdom, the cannabis plant is made up of several structures. The stems of cannabis skinny boasting their iconic fan leaves that extend from areas called nodes. But, where cannabis really assumes its remarkable properties is when she begins to flower.

Cola — not Coca-Cola — refers to the part of a female cannabis plant where the flowers (buds) come together at the plant stem’s tip. Technically speaking, the correct botanical term is “terminal bud,” but most people refer to it as the “cola.” The size and quantity of colas can be increased during growing — trimming (topping), or training, like Screen of Green (ScrOG) or Low Stress Training (LST).

The term calyx comes from the latin word, kályx, meaning ‘husk’ or ‘covering’. To the naive, untrained eye, cannabis buds may just look like petals. In practice, the calyx is actually the bud.If you take a gander beneath those tiny leaves — that look like sugar leaves — you’ll see the tear-shaped nodules: calyxes. They’re a diverse bunch that come in various colors, shapes, and sizes. When fertilized, the calyx forms a protective pocket allowing seeds to grow within. If not fertilized, you’ll find the highest density of those vital trichomes (the glands chiefly responsible for secreting cannabinoids and terpenes) on the calyxes.

Trichomes may be tiny, but given how prominently they feature on the cannabis flower, it’s difficult to underscore their importance. These bulbous globes that are beautifully translucent, microscopic resin glands that coat the flowers with their crystally-like magnificence. Trichomes are also rich in cannabinoids and ooze aromatic oils called terpenes, which is what is responsible for cannabis’s euphoric and therapeutic effects.

Dense on active constituents including cannabinoids and terpenoids, trichomes pack a lot of punch. They produce the the medicinally rich reason used in a variety of concentrates and extractions including BHO (Butane Hash Oil), kief, hash, and their modern interpretations popular for dabbing: wax, shatter, and glass.

Most people call pistils “hairs,” and growing out of each side of the calyx, that’s what they look like. Initially, white, but eventually morphing into red, orange, and brown. It’s not uncommon for them to bend like they’re searching for something. In fact, they are! Only female plants have pistils, and their function is to captures pollen from the “men.” Many people think bright orange “hairs” characterize high-quality cannabis, but in actuality, pistils don’t contain any trichomes, so they have little influence over cannabinoid and terpene-count.

The big, protruding leaves appearing along the length of the plant constitute “fan leaves.” They usually have five leaves, but can have seven or even nine leaves. Sativas often have more leaves. Fan leaves are part of the harvest, and are of interest to anyone wanting to create extracts, infused products, and edibles. They’ve also become popular among juicers who use them to promote health of treat ailments. You’ll derive no psychoactive effects juicing, but you will get a nice amount of THC-1 (the acidic precursor to THC known as one of the most therapeutically valuable cannabinoids). Most psychoactivity occurs once cannabis is burned or vaped (called decarboxylation). When consumed orally, the body processes the THC in a distinct way.