Recreational adult-use and clinical cannabis have been made tremendous progress over the last few years thanks to shifting public opinion and a bipartisan push in support of states’ rights. However, the anti-cannabis lobby (backed by big money donors) are trying to reverse this progress. And, they see the new “law and order” administration as an ally in reversing much of the progress the industry has made in recent years.

The pendulum has clearly swung in our favor, but the anti-cannabis lobby led by Kevin Sabet and the Orwellian-named -- Smart Approaches to Marijuana -- are working hard to change that. How? By peddling long-disproven “theories” propaganda that looks a lot like Reefer Madness 2.0.

Here are three of their biggest anti-cannabis propaganda lies:

Claim 1: Cannabis is a highly addictive and destructive drug

To support this claim they frequently share numbers on the number of teens who use marijuana compared to other drugs such as heroin, stimulants, cocaine., etc. While it is true that cannabis is more popular than other drugs says nothing about how addictive it is. It should be encouraging to note that more people use cannabis than cocaine or heroin. Duh!

What they fail to note is that cannabis has lower addiction potential and toxicity than virtually any other drug. The National Institute on Drug Abuse funded the most comprehensive study to date and found the fewer people become dependent on cannabis than other popular substances. Here’s how cannabis compares (just 9% of those who try cannabis ever become dependent, compared to 15% for alcohol and 32% for tobacco!): 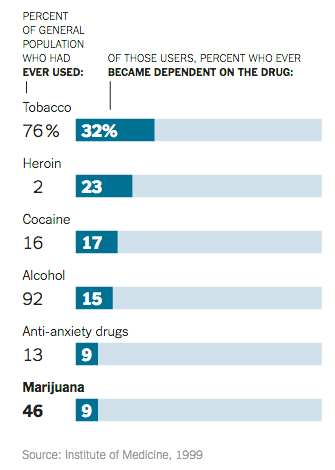 Moreover, as nearly everyone knows, it’s essentially impossible to fatally overdose from cannabis. Over 50,000 people died from opioid (prescription and illicit) overdoses last year. Not a single person died from a cannabis overdose. 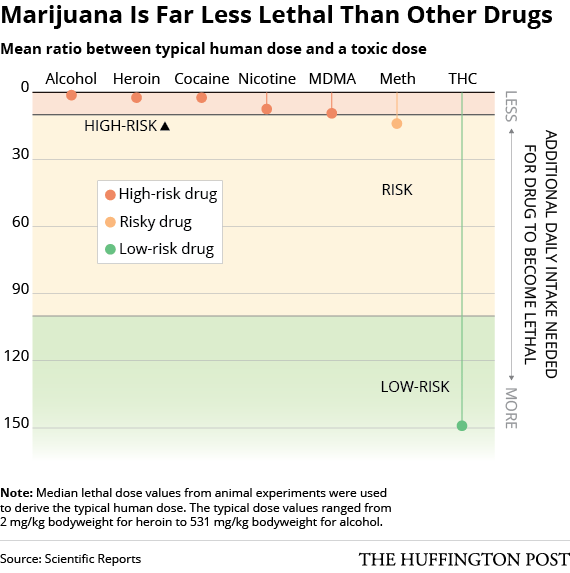 The anti-cannabis lobby uses one study to make the claim that using cannabis lowers IQ. The study they used is the famous Dunedin Study. While this was a well-designed study, anti-cannabis advocates misrepresent the findings of the study, claiming “cannabis use associated with 6 point decline in IQ.” This is a gross misrepresentation of the study.

Columbia University professor, Dr. Carl Hart, also noted that of the 1,037 participants in the study, only 38 users showed a decline in IQ. Hart believes (and most researchers would agree) the sample size is too small to generalize across larger populations.

Claim 3: Cannabis is a Gateway Drug (to Heroin!)

The proposed “gateway theory” that suggest cannabis use will lead to the use of harder drugs has long been debunked. Time Magazine wrote, “Marijuana as a Gateway Drug: The Myth That Will Not Die.” Nonetheless, anti-cannabis activists use the “gateway theory” as a key talking point to argue against cannabis.

If one defines “gateway drug” disingenuously as meaning most people who use hard drugs like heroin and cocaine started on softer drugs first (like cannabis), then sure, cannabis (and, nicotine, alcohol, breast milk?) is a gateway drug. But, to suggest a direct cause and effect relationship between using cannabis and progressing to hard drugs is patently false.

When it comes to opioids, we know that four out of five heroin users who started heroin after OxyContin came on the market started with prescription opioids. However, there is no such correlation between cannabis and opioids. In fact, to the contrary. Evidence suggests cannabis is likely an “exit drug,” helping individuals get off of opioids and use cannabis instead. In fact, states with medical marijuana laws experience significant drops (25% on average) in opioid-related overdoses than states without such programs.

In an age of alternative facts and fake news, it’s important to know the facts and combat misinformation. If we aren’t armed with knowledge, while resting on our laurels, all the progress that’s been accomplished in recent years could quickly reverse. For those of us who appreciate recent progress on the cannabis front, we have a responsibility to arm ourselves with facts and correct those who seek to spread disinformation and propaganda. Our freedom depends on it!